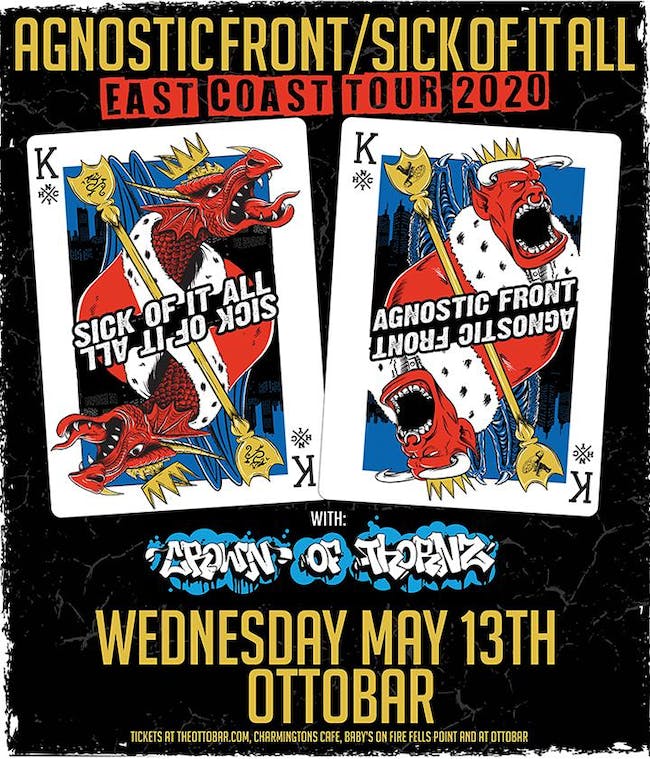 Sick Of It All

iCal
Google
Sick of it All, Agnostic Front and Crown of Thornz at Ottobar 5/13

New York City hardcore legends SICK OF IT ALL aren’t slowing down with age, the long-standing quartet are still pissed off, and the genre stalwarts still see many years ahead. SICK OF IT ALL remain a beacon of continuity, integrity, and resolve. That’s good news for SICK OF IT ALL fans and the hardcore scene. Since forming in 1986, SICK OF IT ALL have traveled the world many times over, played in front of hundreds of thousands, and released 11 acclaimed full-length albums, the latest of which is the riotous if anthemic Wake the Sleeping Dragon!. That SICK OF IT ALL continue to live by the standards in their original charter isn’t a matter of course, it’s part of their respective DNA. Hardcore is SICK OF IT ALL. “We’re a band that thrives from frustration,” says drummer Armand Majidi. “Aging seems to work well with our message, as opposed to a good-time band who sings about partying all night. There are so many horrible aspects of the world that become more obvious to us year after year, which we didn’t see or understand before, which fuel our frustration every day. We’ve lived long enough now to see through the matrix, and thank goodness we have this band, so we can vent about it.”

A Godfather figure is understood to be a purveyor of genre; a pioneer in a particular realm of creation. Perhaps more importantly, and after over 3 decades molding the Hard-core realm, AGNOSTIC FRONT have protected and nurtured Hardcore music in such a way that it still exists healthily & in its proper form, today. As a band that has cultivated their reputation with honesty, and that prioritizes affirming their social messages to the world, GET LOUD! is well suited as the title for their 12th, full length studio album. Although the sociopolitical climate has transformed considerably since the release of the United Blood EP in 1983, the basic concepts of political corruption and social unrest have only been enhanced, and with them the fuel on AGNOSTIC FRONT’s fire. “We’ve always had a voice; had a lot to say. We’re always screaming for a change” says frontman Roger Miret. “Speak up, get loud, say what you have to say. Be the change you want to see in the world. You can’t change the whole thing, but you can make little differences that will matter, eventually.”