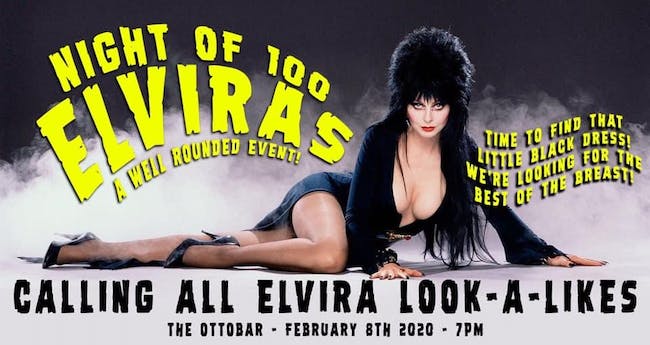 A Date with Elvira, The Universal Donors, RjVj, DJ Shellvira

Greetings Children of the Corny! Don't you spooky nerds just love Halloween?! Feels cheap that it only happens once a year, (and trust me..I KNOW CHEAP!) I've just been DYING to inform you that I’ve planned an event in order to pay tribute to the Queen of Halloween herself, ELVIRA: MISTRESS OF THE DARK!

So, all you ghouls need to do your part, cram 'em in to that "little black dress" and slink on down to the Haunted Hills, err, The Ottobar for.....

🎃Some Tricks! and Treats!🎃

A DATE WITH ELVIRA (CRAMPS covers)

Games Hosted by Baltimore's own Horror Hostess with the Mostest (and my personal ghoulfriend), Aurora Gorealis of,....you guessed it, Shocktail Hour with Aurora Gorealis! 🍸💀

Including special appearances by the hosts of Mondo Baltimore

I'm bringing my Haunted Victorian Red Velvet sofa, guys, so DRESS UP AS ELVIRA: MISTRESS OF THE DARK and get a portrait done by Breck Jones Photography