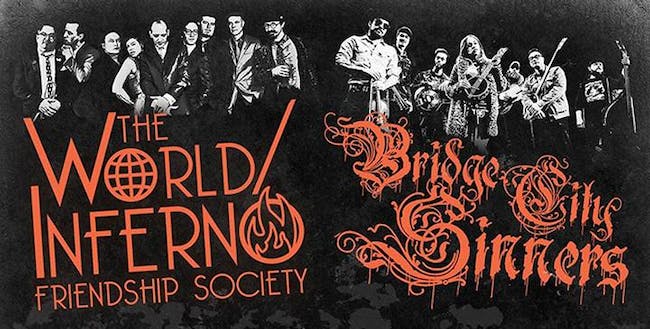 The World/Inferno Friendship Society (also referred to as "World/Inferno", "Inferno", or “W/IFS”) is a punk/soul/klezmer/jazz band from Brooklyn, NY. While its collective membership features horns, piano and guitar and has a membership of about 40 players, only about seven to ten active members usually perform at a time. The World/Inferno Friendship Society has toured North America and Europe extensively over its 25 year history. In 2020, the band will have toured up the entirety of the East and West coasts of the United States, through the Midwest, South, and Texas, and throughout Western and Central Europe, as well as the UK, all before August! The band has created its legacy via live performance, and is doing a lot of it behind new album “All Borders Are Porous to Cats.”

The Bridge City Sinners take folk songs in the direction of a punk rocker. A rowdy folksy mosaic of banjo, violin, guitar, mandolin, upright bass, & ukulele. The Sinners started their journey as a rotating cast of friends in 2016 who just wanted to play music on the streets “busk” in Portland, Oregon. They have transitioned into a powerful force playing festivals in 2018 such as Vans Warped Tour, NW String Summit, the Fest, & Seattle Folklife Festival.

Before the Bridge City Sinners, lead singer Libby Lux and upright bass player Scott Michaud infrequently started playing music together on the streets of Portland, Oregon over eight years ago. Without rehearsal, nor a plan, a few times a year they would meet up with other various street musicians to sing and yell at passer byers. Years before that, on their separate journeys, they traveled, hitch-hiked, and howled at the moon across the United States, Canada, and Mexico. In hobo fashion, they earned what they’d eat and roofs over their heads by the papers and coins tossed into their hat.

Through their years of wandering, they were able to pick up a rich catalog of songs passed through the traveling / busking community. In 2012, their mutual best friend and lead singer of folk-punk band Profane Sass, passed away when he fell off a train in Pittsburgh, Pennsylvania. In a way the Bridge City Sinners are a homage to keep his spirit alive and continue passing along the music they all sang together on the streets, hidden in trains, and in living rooms across the continent. They formed the Bridge City Sinners in the Winter of 2016.