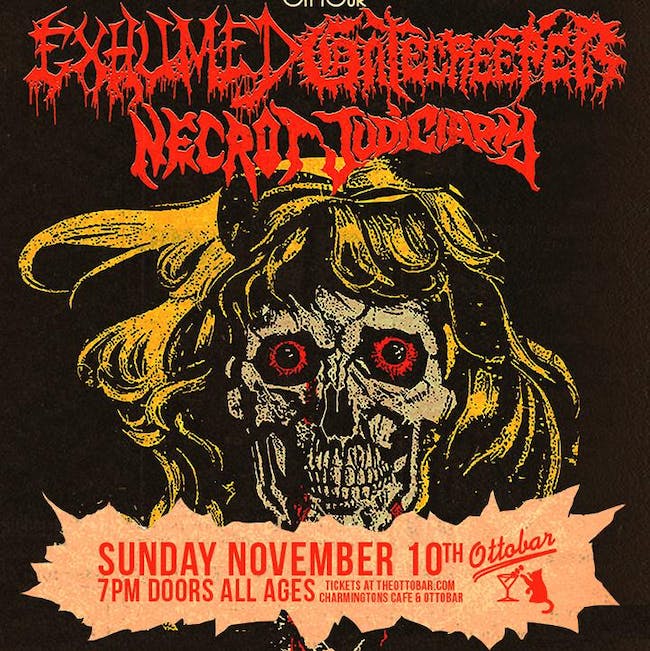 Gatecreeper was formed in September of 2013 with members originating from both Tucson and Phoenix, Arizona. After a debut 4-song EP a series of splits, the band signed to Relapse Records which resulted in the release of their debut full-length Sonoran Depravation on October 7th 2016. The band has since toured with Nails, Pallbearer, Code Orange, Skeletonwitch and more. Gatecreeper play crusty, doom-soaked death metal at its most infectious and uncompromising, with a massive sound that calls to mind the classic Swedish buzz-saw attack of Dismember and Grave mixed with the impeccable groove of Obituary and Bolt Thrower.

Exhumed was formed in the US in 1991 by Matt Harvey (guitar, vocals), Col Jones (drums), Derrel Houdashelt (guitar), Jake Giardina (vocals) and Ben Marrs (bass). They soon entered a studio and recorded their first demo, "Excreting Innards", which consisted of six tracks. It was released in the start of 1992 along with two other demos, "Dissecting the Caseated Omentum" and "Goregasm". In 1993 the 7" EP "Excreting Innards" was released and shortly after the band began playing live. Ben was eventually forced to leave the band, but Jake took over bass duties along with vocals. The demo "Cadaveric Splatter Platter" also followed in 1993 along with "Grotesque Putrefied Brains" which was the last release to feature Jake since he left the band. He was replaced by Mark Smith (vocals) and Matt Widener (bass). Marks stay was short and he was replaced by Ross Sewage.

In 1994 the sixth demo, "Horrific Expulsions of Gore", was released. It was followed by the live split, "Deterioration of the Senses", with Haemorrhage. After this Matt Widener left the band but Ross took over his bass along with vocals. They then released another split, entitled "In the Name of Gore", with Hemdale. Several line-up changes and more 7" splits with various bands were released throughout the years. In 1998 they finally released their first full-length album, "Gore Metal" through Relapse Records.

"Slaughtercult" followed in 2000 and "Anatomy is Destiny" in 2003. The compilation album "Platters of Splatter", which included almost every song made by the band, was released in 2004.

The band more or less dissolved in 2005-but never say never.

Members of Exhumed also are in Dekapitator.

Col Jones parted ways with Exhumed in Summer 2003 due to professional reasons (he is a scientist).

In the wake of his departure, Bud Burke also decided to leave the band due to his aversion to a heavy touring schedule.